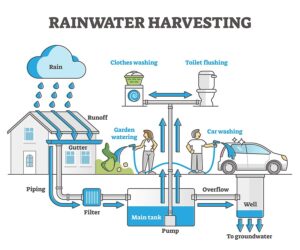 To help the country deal with water shortages and the increasing problem of drought, Turkey will now be installing rainwater harvesting systems in all new buildings built on plots larger than 2,000 sq/m, with rainwater collected in underground tanks to help reduce reliance on mains water supplies.

According to Euronews, the country is experiencing its most severe drought in ten years, with Istanbul warning that it has less than 45 days of water left as a result of poor rainfall levels seen in the second half of 2020.

Speaking to the news source, water management expert Dr Akgun Ilhan explained that Turkey has been facing drought conditions since the late 80s, generally every four to seven years, which she puts down to climate change and a “lack of adaptation or even maladaptation” to the crisis.

While climate breakdown does interrupt the natural water cycle, sealing urban surfaces with concrete and asphalt is also having an impact, ensuring that there are few green spaces available where water can “meet soil and fill groundwater resources”.

But now, as reported by the Hurriyet Daily News, a new regulation has been prepared by the Environment and Urbanisation Ministry, meaning that municipalities and institutions now also have the authority to impose obligations on smaller buildings, with experts saying that rainwater harvesting and greywater recycling can help save up to 40 per cent in water consumption.

Dr IIhan also advised that it is important to understand that the country’s limited resources are now shrinking as a result of climate change, as well as the growing population, which is now more than 84 million.

She suggested that the most sustainable strategy moving forward is to reduce water demand, as opposed to increasing water supplies through water transfer systems and building more dams.

The expert went on to add: “One way we can do this is for the central government to obligate local authorities to reduce that 43 per cent water loss to a more acceptable level through legal instruments and economic incentives. But, and at the same time, local authorities can make rainwater reuse and rain harvesting technologies obligatory for new constructions in cities.”

Water shortages are expected to have an impact in the UK, as well as Turkey, in the not too distant future, with some parts of the country predicted to see demand outstrip supply in as little as ten years’ time.

If you’re interested in finding out about commercial water saving and how your business can save both water and money at the same time, get in touch with the team here at H2o Building Services today.

We can advise you on the most appropriate water management strategies for you and your business, ensuring that these evolve over time in line with your water usage and consumption in the future.