Water bills now back to normal at Bramcote School, all water leaks have been repaired.

Various contractors were called in to assist including the local water company, surprisingly little positive assistance was offered by the water company, the Water Audit Experts at H20 Building Services were then called in.

With a total area of 112,937 square metres and 3 schools on the site and no underground water supply pipe drawings, coupled with restrictions on working times identifying a water leak was going to be no easy task.

Flow rate checks on the incoming water meter confirmed a steady water flow of 2 cubic metres per hour. The water leakage engineers proceeded to trace the underground water supply pipe and valves using acoustic sounding techniques, during the process a water leak noise was heard on a fire hydrant indicating the water leak was somewhere on a large section of the underground pipework. The supply was excavated and an isolation valve was fitted in order to break down the area of interest. 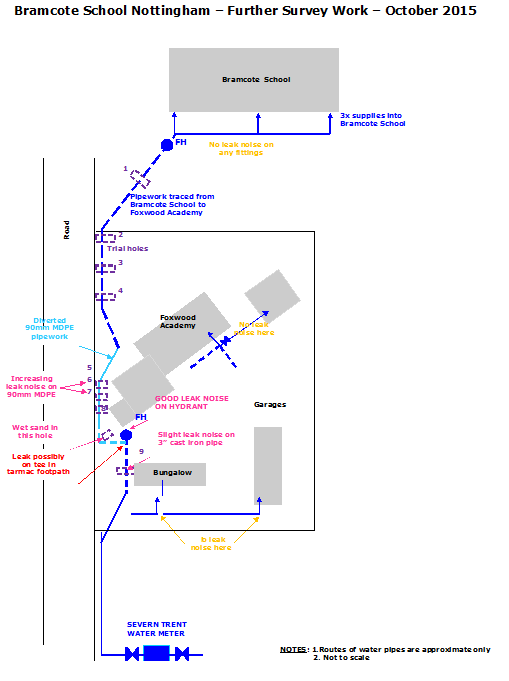 The valve was closed and with the water meter still registering water flow this indicated that the water leak was between the valve and the electricity substation (see diagram of the isolation valve installation in the water leak repair report attached ) Bramcote School Nottingham – Completion Report 02.12.15. Further tests revealed the leak to be underneath the substation, the worst possible place for a water leak!

Having considered all options it was decided to attempt a “Sliplining” process, the existing water pipe was 80mm in diameter, the engineers cut into the pipe underneath the substation to the other side and re-connect this pipe, therefore by-passing the leak.