5 Alternative Water Sources: How To Futureproof The Planet

You may or may not already know that water stress and scarcity is fast becoming one of the biggest global threats to our way of life – even here in the UK, a country renowned for the amount of rainfall it sees each year.

Did you know, for example, that Bristol’s water supply is already experiencing signs of water stress thanks to climate change and the increasing likelihood of both droughts and heatwaves, as well as flooding? Chances are, not.

Every continent is already feeling the effects of water scarcity, with UN data showing that usage has been growing around the world at more than twice the rate of the population increase in the last 100 years. Growing numbers of regions around the world are now reaching the limit at which their water services can be delivered in a sustainable way, particularly in drier more arid parts of the world.

Rapidly expanding urban areas will put even more pressure on scarce water supplies, as well as putting the onus on neighbouring resources. The complicated relationship between world development and water demand is also expected to be amplified by climate change and bioenergy demands, as well.

There are now more than two billion people who live in places that are experiencing high water stress. Global Water Institute figures suggest that 700 million people around the world could be displaced by intense water scarcity by 2030 – which is just a decade away.

Now’s the time to tackle the problems presented by water stress head on and, as the UN observes, we should now be treating water as a scarce resource, putting greater emphasis on managing demand in order to safeguard it for future generations.

5 alternative water sources that could help

The good news is that there is much that can be done to protect our water supplies and improve water management. Here are just a few strategies that many have already adopted to help reduce reliance on mains water.

This is the process of collecting and storing the rainwater that falls on the roof of your site, which can then be filtered and reused instead of mains water. You can use it for a wide range of applications, including toilet flushing, laundry and process water, and vehicle washing.

This is water that is discharged from businesses and their operations. It’s treated at a wastewater facility before being reused for applications like industrial processes and irrigation. Successful projects of this kind require a reliable source of wastewater in the first place, however, in sufficient quantities and of high enough quality in order to meet water demand.

This is lightly contaminated water that is generated through the use of showers, sinks and washing machines (although not from urinals, kitchen sinks and toilets). It’s typically used in applications like flushing urinals and toilets, as well as irrigation, helping to reduce the water taken from fresh sources, as well as reducing the amount of wastewater being sent to treatment facilities.

Any rain runoff over ground-level surfaces can be treated to non-potable levels if it hasn’t infiltrated into the ground or entered waterways like lakes or streams. Again, this can be used for washing applications, irrigation and so on, with the added benefit of reducing pollutants and the possibility of flooding. It can also prevent stream bank erosion, damage to infrastructure and sewer overflows.

This is the process of removing impurities and salts from brackish or seawater, both of which represent excellent options as freshwater alternatives. It’s impractical to use seawater for the likes of toilet flushing and so on because of the corrosive nature of the water itself, which is why desalination is required in order for seawater to be widely used.

There are drawbacks to this, however, and the desalination process itself is energy intensive. It also produces brine, which can result in elevated levels of elements found in seawater like lead, manganese and iodine.

Building Green explains that the brine produced is typically piped out to sea but if it’s not diluted first it sinks because it’s more dense than seawater – which leads to higher-salinity seawater at the bottom of the ocean, where much of our sealife is concentrated.

There are many benefits to researching and adopting different strategies where water usage is concerned. Not only will you be helping the planet and protecting our precious water resources, but you can even save yourself money into the bargain by using less water from your standard supply. You’re also protected against any interruptions to the mains supply.

If you’d like to find out any more about your options where alternative water resources are concerned, get in touch with the team here at H2o Building Services today.

Call our expert consultancy team today on 0845 658 0948 alternatively, you can email us at info@h2obuildingservices.co.uk

5 Alternative Water Sources
How to Futureproof The Planet you may or may not already know that water stress and scarcity is fast becoming one of the biggest global threats to our way of life – even here in the UK, a country renowned for the amount of rainfall it sees each year.

END_OF_DOCUMENT_TOKEN_TO_BE_REPLACED 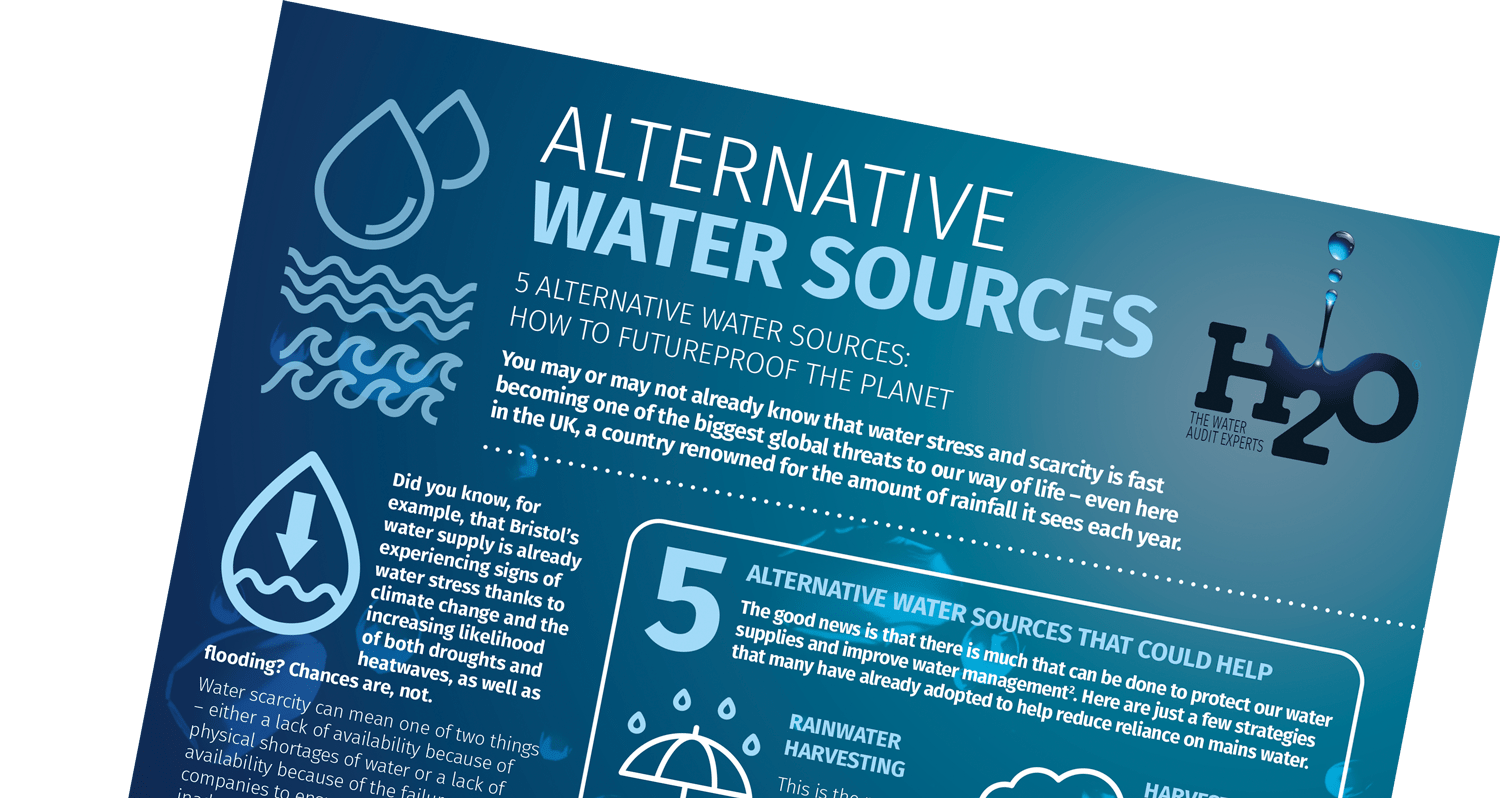