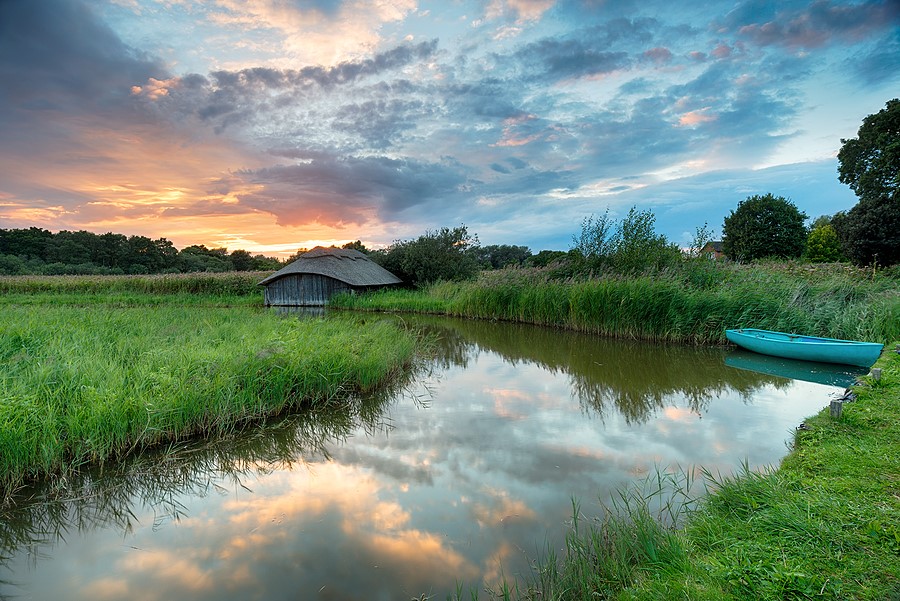 A new project intended to reverse decades of pollution in the Norfolk Broads is now underway, with the Environment Agency giving the go-ahead to install underwater permeable barriers, which will allow for a process known as bio-manipulation, transforming the region to a clean species-rich haven for wildlife.

The first phase of the Hoveton Great Broad Restoration Project saw the removal of approximately 55,000 cubic metres of sediment, which was choking the broad. This sediment was then used to create new areas for wildlife, while the new bio-manipulation process will improve the water quality.

The legacy of pollution at the Hoveton Great Broad dates back to around 1960 and, as a result, is now dominated by damaging algae, which is preventing light from reaching the bed and stopping aquatic plants from growing.

Water quality has been improved already thanks to Natural England, the Environment Agency, farmers and water companies, all of whom have been making improvements in sewage treatment and farming practices – but further action is necessary to allow nature to heal… hence the bio-manipulation project.

The process involves adding or removing certain species from an ecosystem in order to bring about positive changes. Approximately 75 per cent of the fish in Hoveton Great Broad will be moved to a temporary new home in the wider broads system.

This will see the number of water fleas increase, with algae their main food source – so, over time, crystal clear water will return, which will then allow light to reach the bed of the broad, allowing a wide variety of water plants to flourish once more.

The broad will then be stabilised thanks to these new water plants, which absorb nutrients and provide habitats and food for a diverse wildlife community, including more varied and resilient populations of fish.

Hannah Thacker, Natural England’s area manager for Norfolk and Suffolk, said: “This exciting nature recovery project will reverse the impact of decades of pollution. This will help to re-establish the broad’s once great ecological quality, all using proven restoration techniques.

“The resulting biodiversity will be more resilient to the effects of climate change and secure the future of this important wetland habitat. This is not only for nature’s benefit but for everyone who enjoys this unique place.”

This comes after a new report from the RSPB, National Trust and the Rivers Trust, revealed that just 14 per cent of waterways in England currently meet the standards for good ecological status.

They are being devastated by agricultural waste, raw sewage and pollution from abandoned mines, which is in turn having a huge impact on nature, causing the decline or near-extinction of many different species.

One emerging threat was identified as plastic pollution, but one of the main drivers behind water pollution is the poorly regulated use of fertilisers and pesticides in farming.

Do you want to find out about water efficiency? Get in touch with H2o Building Services today.